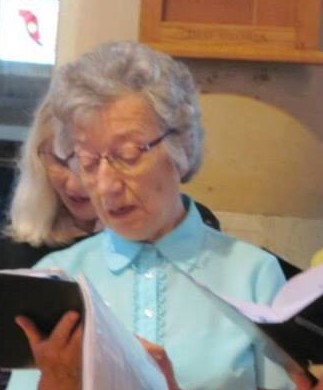 
Why did you join the choir?

I have always enjoyed singing and sang in school and church choirs, etc.  I saw the advertisement for people to join a community choir, which was sponsored by ‘Age Concern’ (now Age UK) to bring together the younger and older (which included me!) generations.  So I put in my application.

How was your first rehearsal?

The first rehearsal was on Monday 11th January 2010 in the upper room at the School Music Service premised in Church Hill.

There had been heavy show falls the previous week so I wasn’t sure how many people would attend.

I wrote in my 2010 diary “A lot of the snow thawed today but still a lot on the side roads. Went to community choir first rehearsal, which went well with a good number of people.

What changes have you seen in the last 10 years?

The choir has gone from a small number of people who enjoyed singing and the occasional performance, to a greatly increased number of members, still enjoying singing but having progressed to performances such as Vivaldi’s ‘Gloria’ and Faure’s ‘Requiem’.

What is your proudest/fondest memory of the choir?

The fact that as well as the special performances we can equally sing at Care Homes, with the residents joining in a sing-song and obviously enjoying it.

How, if at all, has the choir impacted your day to day life?

It is something I really enjoy and look forward to. I have greatly missed not being able to attend for a while.

What are your hopes for the future?

That the choir will continue to flourish and play its part in the community.  (On a personal note that I will be able to get to rehearsals when they start again!)